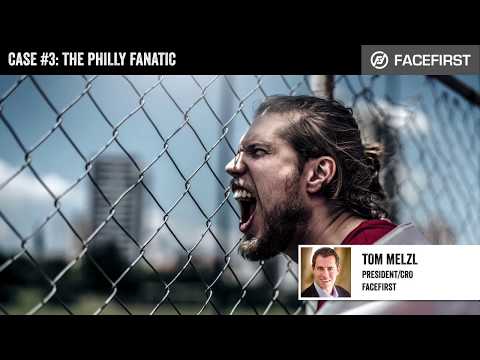 Each day, FaceFirst helps retailers prevent shoplifting and organized retail crime. The Case of the Philly Fanatic reveals how face recognition caught an especially devious criminal with a history of recidivism.

The perpetrator in this case became known to loss prevention professionals as The Philly Fanatic, because of his penchant for wearing Philadelphia Phillies merchandise. His signature scheme involved finding a low-cost cabinet, filling that cabinet with expensive items. He would then use double-sided tape to close the cabinet and ensure that it remained closed. He would then purchase the cabinet as normal, making off with the expensive goods.

The average theft per shoplifting incident is $800, according to the National Retail Federation. But the Philly Fanatic was especially ambitious. He would typically make off with over $2000 worth of goods and then sell them to his fence (in the world of crime, a “fence” refers to a criminal whose primary job is to buy and sell stolen goods).

How FaceFirst Solved the Crime

Our customer had identified The Philly Fanatic in the past, but they thought that he had left never to return. However, after installing the FaceFirst platform, the customer realized that the Fanatic was returning again and again, but his visits were going undetected. By examining FaceFirst data, our customer’s loss prevention team saw historical data showing that The Philly Fanatic had been returning to the same store location every 1-2 days with different accomplices.

Using FaceFirst, our customer enrolled the Philly Fanatic in its database and received an alert the next time he came in and tried to carry out his scheme. The Philly Fanatic was apprehended and turned over to law enforcement.

This is just one example of how face recognition protected merchandise and helped bring a criminal to justice. If you’re interested in learning more about why face recognition offers the fastest and most dramatic ROI of any retail security, contact us today.

ORCorganized retail crimeRetailRetail Security
Previous PostCheck Out FaceFirst Face Recognition at Globa...
Next PostFaceFirst and Genetec Inc. Announce Technolog...
Visit FaceFirst at NRF: Booth 4030
FaceFirst uses cookies to enhance your experience and to help us better understand how you use our website. Learn more about setting cookie preferences here. By continuing to browse, you indicate your agreement.
×